The Bunker is a landmark in Kin Reimagined. It is buried and hidden in a hill near Kin.

The Bunker can be entered by an open hatch sticking out of the ground. The door is dark grey and fully opened. This can be found on a flat section of a hill to the North of Kin, in between two large rocks. These rocks, combined with its height, make it very hard to spot. Inside of the hatch, there is a truss ladder stretching down to the inside.

Amusingly, a bicycle can fit through the hatch, but there is no way to get it back out.

Although it looks small from the outside, it is very large on the inside. The walls are coloured light stone grey with a dark grey floor. It is devoid of any other objects besides yellow crates in several rooms that can't be moved or looted from. When the Military Outpost was added to the game, several rooms were added. The biggest addition was a room comparable to the main room of the Mine which spawns both civilian and military loot, with several corridors branching off of it. The additions make it easy to get lost. 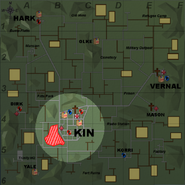 The location of The Bunker on the map

The inside of the Bunker (lightened)
Add a photo to this gallery
Retrieved from "https://apocalypse-rising-reawakening.fandom.com/wiki/The_Bunker_(Kin_Reimagined)?oldid=14647"
Community content is available under CC-BY-SA unless otherwise noted.