Note: This article refers to content that has been cut from the current version of Apocalypse Rising.

The XM16E1 Patriot is an automatic primary Assault Rifle that fires 5.56x45 rounds for 30, 50, and 100 round magazines. It looks very similar to the XM16E1, however, the barrel is cut short and the stock has been taken. The Patriot model was made to make the shape of a pistol and the power of an Assault Rifle in the game it originated in (Metal Gear Solid 3 ). This gun is considered the best gun in the game by many players.

The Patriot is a very powerful weapon. It does the same damage as all the STANAG Weapons in the game and is accurate. The Patriot can fire a massive amount of rounds in a very short amount of time, which could be seen as both a pro and a con. It is advised to only be used if you have large numbers of 50 round mags or drums. Another upside is that the gun has one of the best sights in the game because there is no lining up necesary. The sight is just a circle, and all you have to do is line the head in the circle and shoot. If you can get the gun, you should certainly use it, unless you have another weapon that you prefer. It is a definite step up for anyone with a civilian weapon. Due to its rarity and overall performance in battle, it was considered a trophy by many players. 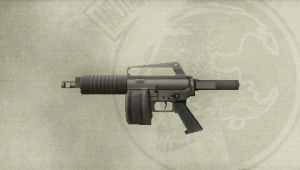 Retrieved from "https://apocalypse-rising-reawakening.fandom.com/wiki/Patriot_Assault_Rifle?oldid=14673"
Community content is available under CC-BY-SA unless otherwise noted.